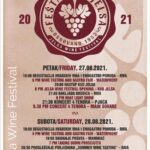 Jelsa’s wine festival has returned to its original intentions – as a merry showcase promoting Hvar’s wines, especially the best of them which are produced in the area around Jelsa, a fertile area for growing grapes, where different producers work to their own theories, resulting in a delightful variety of red and white wines, ‘opolo’ rosés and prošek (sweet dessert wine). Over the last thirty years, these wines have distinguished themselves, winning prizes in competitions and delighting Jelsa’s visitors, who have the chance at the Wine Festival to taste the various wines and appreciate the differences between those produced on Hvar’s southern slopes, Jelsa’s valleys and hillsides or fields by the sea.

After experiencing these delights, lots of people go home from Hvar with happy memories which are not just limited to the island’s sunshine and exquisite blue sea, but include the more surprising discovery of the quality of the island’s wines, the golden glow of the whites and the deep crimson of the reds. The Festival culminates with the announcement of which are the best wines of the year.

The two-day Festival offers a diversity of entertainments. There are various sports and fun competitions, including a water polo match in the harbour, a rowing competition, international regattas, as well as the special highlight, a competition in which participants have to climb a 10-metre pole to reach and bring down a whole smoked ham.

It goes without saying that ample food is available throughout, and there are concerts by the Jelsa Cultural-Artistic Society, local and guest klapa harmony singing groups, and performances by famous artistes. Not to mention a magnificent fireworks display.

The Festival usually opens on the Thursday before the last weekend in August, and we are sure that you will have the best time of your life during those three days of fun and celebration!

The first Wine Fair, as it was known then, was organized in 1952by Jelsa’s ‘Community Cooperative Committee’ (‘Zajednica – zadružni savez Jelsa’). The Fair was titled ‘Regional Cooperative Rally’ (‘Kotarski zadružni slet’). In 1954 it was held on ‘Cooperative Day’ and from 1956 onwards it was known as ‘The Wine Fair’ or ‘The Cooperative Rally’. In 1966 the Wine Fair was held on August 14th, and the day was pronounced Jelsa’s Tourist Day. For years the Festival was held in the first half of August, from Friday to Sunday. Crowds would gather in the mornings, and celebrations would continue into the early hours of the following day. Huge quantities of wine were drunk, and the aim was to empty the cellars and sell off last year’s wine, to make way for this year’s harvest.

Nowadays, the Wine Festival aims to promote high quality wines along with a wide variety of fun events for the whole family, making it a high point in the summer tourist season.