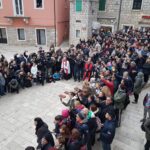 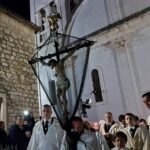 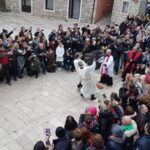 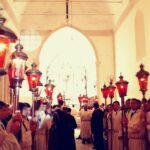 Please note that in view of the continuing Covid-19 pandemic crisis, as in 2020, this historic Procession in 2021 will be held under strict epidemiological conditions, as laid down by the Croatian National Authority for Civil Defence (Glavni stožer civilne zaštite). The numbers taking part will be strictly limited, and there will be penalties if they are exceeded, so please do not try to ‘gatecrash’! For Procession live stream, follow link: LIVECAMJELSA

The Procession in normal times
Catholic traditions include a number of processions throughout the liturgical year. The UNESCO-listed ‘Za Križen’ (‘Following the Cross’) Procession from the Island of Hvar is an exception: although it is a deeply religious event, it is not part of the normal Catholic calendar. It has been taking place round six settlements (Jelsa, Pitve, Vrisnik, Svirče, Vrbanj and Vrboska) in the centre of Hvar Island for some 500 years. It is organized by the lay brotherhoods (bratovštine) from each place, and normally anyone can join in.

The Procession is called ‘Za Križen’, because the central figure is the Cross-Bearer, a local man from each settlement who has chosen to take on the arduous task of walking through the night of Maundy Thursday carrying a veiled wooden cross weighing at least 12 kilos. The Cross-Bearer generally walks barefoot or in (thick) socks, but can wear shoes if he chooses. A windy night makes the 25-kilometre walk extra arduous, as the veil over the cross acts like a sail, hindering forward progress! He is normally supported by two companions, who must themselves have carried the cross in the past, in case he needs help of any kind. The cross must not touch the ground during the Procession, except when it is placed on a stand in a church.

The Cross-Bearer, his entourage and followers visit each of the six parish churches in the circuit to pay their respects to the symbolic representations of Jesus’ tomb which is arranged around the chancel. The Cross-Bearer is the leader of this people’s procession, although he is normally preceded by members of his entourage, rather than being right at the front.

A magical marathon walk
The Cross-Bearer’s entourage under normal conditions might consist of anything up to 50 men. Walking in two single lines, one group goes ahead of the Cross-Bearer and his immediate associates, while the rest follow behind. Two things make the event particularly magical: the gentle red and golden lights of the lanterns and candles progressing through the darkness of the night, and the singing. There are penitential hymns sung by the men in the Cross-Bearer’s entourage as they walk, while the women who make up the rearguard sing their prayers, such as the ‘Hail Mary’ (‘Zdravo Marijo’). In each parish church the ancient harmony of ‘Our Lady’s Lament’ (‘Gospin plač‘) is sung after the congregation’s prayers and hymns. It is a deeply evocative plaint, as a high-pitched female-sounding note emerges above the deep vibrating tones created by the singers. The chant is in three parts: two men sing the opening part, while three or four sing the response, followed by the concluding part sung by the original singers, during which the Cross-Bearer and his entourage make their way out of the church towards their next destination.

Who carries the cross?
In recent years, especially since Croatia’s emergence from the previous Socialist Yugoslavia system, local males sign up sometimes years in advance for the privilege of carrying the cross. There were times during Socialism when it seemed no-one would carry the cross for some settlements, and on occasion it even seemed people would be punished for taking part, especially schoolchildren, who were often subjected to exams the next day, Good Friday, to ‘teach them a lesson’. However, the local people were never deterred from maintaining the continuity of the custom.

Each of the six processions has its own traditions. For instance, Jelsa has a special ceremony (Primopredaja Križa) the week prior to the event, in which the cross is handed over from last year’s Cross-Bearer to the current one. There are variations in the route: for instance, the Jelsa Procession goes to Pitve along the old path through the fields, while most of the others walk along the road. The prayers are standard to all six Processions, but different hymns are sung. Besides the main churches, each of the six Processions visits minor churches and chapels, according to individual preference. For instance, the Pitve Procession usually visits Jelsa’s Church of Our Lady of Health, whereas the Jelsa Procession does not.

Uniquely, the Jelsa Cross-Bearer sprints along the waterfront into Jelsa’s Pjaca, where the parish priest and community are waiting. This does not mark the end of the walk, however, as the Procession then turns off to the little Church of St. John, before heading back to the parish Church of our Lady’s Assumption. All the other Processions walk back to their home church, circle round it clockwise, as they have around each church along the way, and then go inside for the final round of prayers and singing. The parish priest may join in the Procession towards the very end. After the final hymn, all present congratulate the Cross-Bearer individually, which is usually a very emotional scene.

Each Procession ends sometime around 7 or 8am on Good Friday, after which the Cross-Bearer and his comrades retire for refreshments and a rest in preparation for the three-hour ritual which is the norm for Good Friday in the Catholic calendar.

Highly honed preparations
The ‘Za Križen’ Procession takes a lot of organizing, and is a great test of stamina, not just on the walk itself. But the long years of practice have meant that in the main everything works smoothly. In the period before Easter Week, the Cross-Bearer personally invites all those who are to form his entourage, and then gathers them together almost nightly to practise the singing, so that he can choose who will sing the Mother’s Lament, and who will be the lead singers on the walk.

Meanwhile, everyone who can is busy with other necessities, such as clearing the village paths, ensuring that the roads are clean, and baking enormous quantities of traditional dry cakes. This is Dalmatia! so eating and drinking are of course an essential part of the proceedings. The Cross-Bearer provides food and drink for his supporters during the preparatory ‘audition’ process, a meal before the Procession, and a breakfast after the finish. The breakfast on Good Friday morning, a day of fasting, is frowned upon by the clergy, but it is a long-standing tradition, not to be lightly broken.

Immediately after the Procession has ended, each church has to be cleared of its special decorations, and any litter cleared up, in readiness for the Good Friday service later on.

During the Easter weekend, beautiful arrangements of the little dry cakes, sometimes together with a bottle of the Cross-Bearer’s wine, are distributed to all the households which have taken part in the preparations. Finally, on Easter Monday there is a big (enormous) feast for all the men who have helped the Cross-Bearer: in Pitve that means all the men of the village, who are served by the long-suffering women – the women are rewarded at a later date for their efforts with a special celebratory meal. Obviously, all this costs a lot of money in food alone. It is customary for the Cross-Bearer to be given gifts of money or sometimes large quantities of meat ordered from the butcher’s, to defray the costs.

The ‘Za Križen’ Procession was inscribed on the UNESCO Representative List in 2009.

This video shows the Jelsa Procession in 2009, when the Cross-Bearer was Marko Huljić, having passed through Pitve and Vrisnik, progressing through the night of Maundy Thursday round the villages of Svirče, Vrbanj and Vrboska before returning home to Jelsa in the early morning of Good Friday. There are short extracts from the haunting plaint ‘Our Lady’s Lament’ (Gospin Plač) in the churches, as well as the hymns and prayers associated with the Procession. The last part of the video features the Good Friday rituals of Christ’s Passion and the veneration of the Cross, followed by the traditional Easter Monday feast for the Cross-Bearer and all the men who took part, whether in his entourage or as singers, or in any other capacity. Despite having sung their hearts out during Holy Week, especially during the overnight marathon Procession, they are in fine voice to celebrate the end of their efforts. The video concludes, touchingly, with short speeches by the Cross-Bearer’s father and the much-loved assistant parish priest don Jurica – then more singing, and then… the destruction of a giant cake (a tradition more usually associated with Hvar weddings)!